Today, the brand is made up of several branches, including Niles Steel Tank, Bradford White Canada, and Laars Heating Systems. With such a long history and so many products, it can be tough to know where to start looking.

To help you choose, we have written three Bradford White water heater reviews and compiled them in this article. They should give you a better sense of the company and the advantages and disadvantages of their heaters.

To find the best Bradford White products, we scoured the company’s range, got expert advice, and read numerous user reviews. Thanks to all that research, we now have our top-three selection. 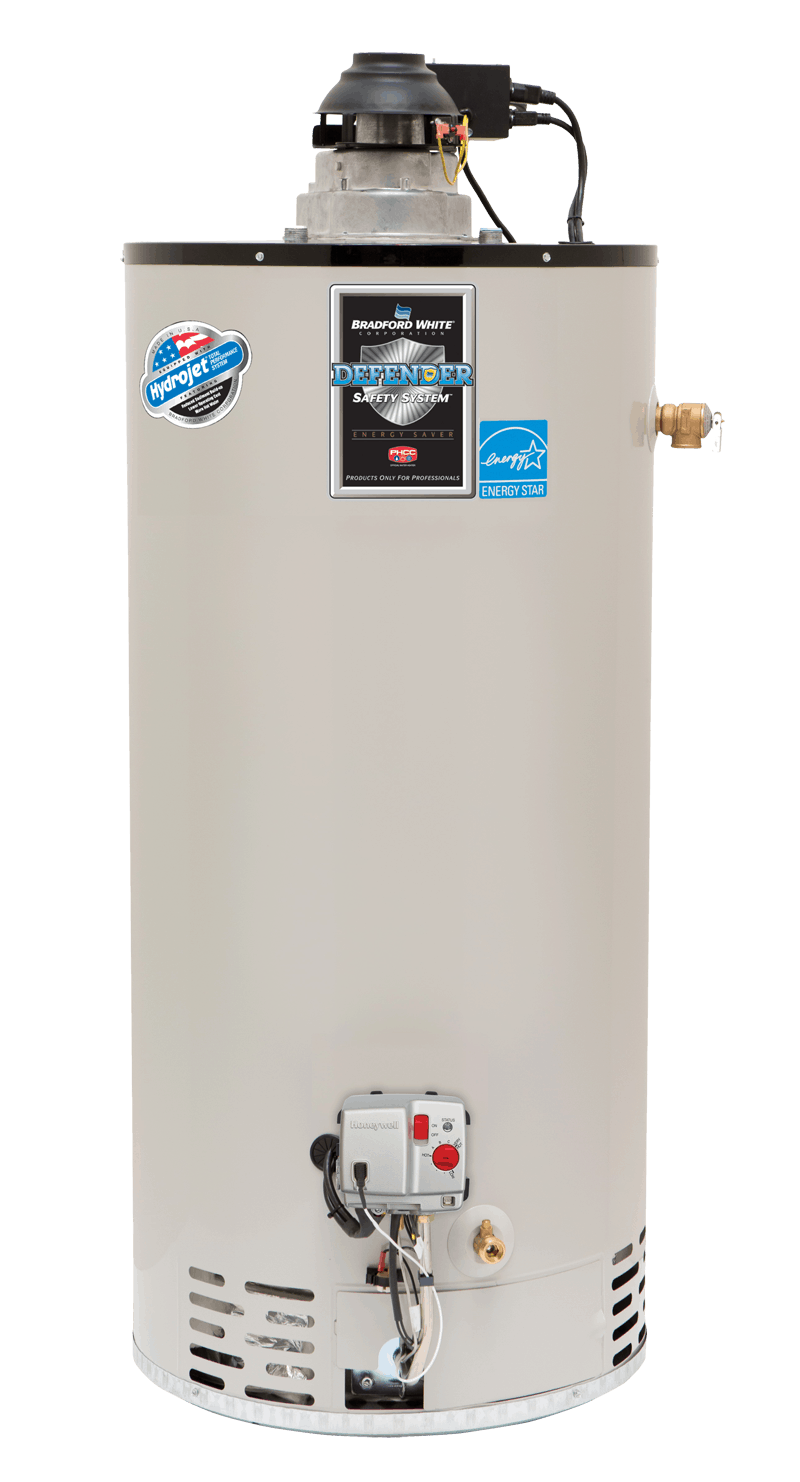 When writing this list, it was impossible to avoid this gas-powered 50-gallon water heater. Bradford White’s fan-assisted gas water heater is one of the best of its type. It is Energy Star certified and even exceeds those requirements.

One feature that makes this water heater so economical is its high-efficiency blower. This draws in air through a baffle system, which results in higher water heating efficiency. It is also powerful, with a more than 75-gallon first-hour rating.

This unit also has the ICON System — an intelligent gas control featuring a spark-to-pilot ignition system. It prevents a constantly-burning pilot, which often results in higher energy waste. The ICON System helps you save on pilot gas during low-demand periods.

It also features an advanced temperature control system. This constantly monitors the burner to ensure the temperature stays consistent. A green LED light indicates when the heater is on and communicates different diagnostic codes.

Something we find particularly beneficial is the flammable vapor sensor. This is an electronic sensor that prevents the burner from operating if it detects flammable vapors.

Bradford White also claims that the unit is maintenance-free and doesn’t require frequent cleaning thanks to its Hydrojet system. The system will reduce sediment but also increases the first-hour rating by pushing the water around the unit.

It features a fully automatic control which is a fast-acting thermostat mounted at the surface. The thermostat is fitted with a high-limit energy cut-off, essentially a reset button in case it overheats. Bradford White included immersed heating elements for efficient heat transfer directly into the water.

This unit also boasts the Hydrojet Total Performance System. In tandem with Bradford White’s Vitraglas lining, this reduces the risks of rust and corrosion. They also fused the Vitraglas to the steel tank for extra protection.

The top and sides of the tank are insulated by a thick layer of non-CFC foam. This improves efficiency and allows for less energy consumption.

To further reduce heat loss through the pipes, heat traps are fitted on the water inlet and outlet. Bradford White also claims that the heat traps reduce the operation noise of the unit by incorporating a flexible disk. 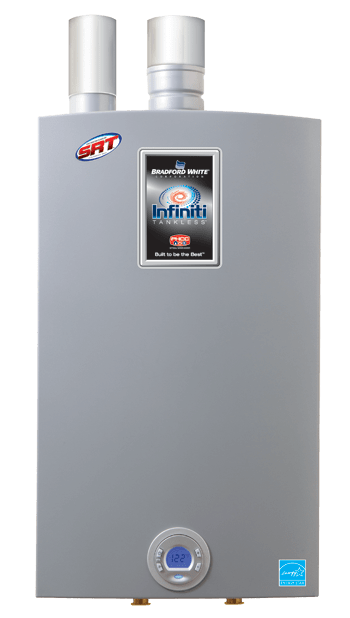 The Infiniti RTG-K-160-N1 is a condensing tankless water heater. It is a powerful little machine that boasts some very useful features.

One of its key features is the SRT or scale reduction technology. Scale build-up in tankless heaters usually results in premature failure or increased need for maintenance. Bradford White’s SRT effectively eliminates this issue.

The need for a recirculation pump and an internal buffer tank has also been eliminated, thanks to the company’s STEADISET technology. This reduces the chance of the “cold water sandwich” effect where the unit suddenly stops producing hot water.

This heater also has a self-calibrating fan and gas valve — a combustion management system. It uses sensors to configure the air-fuel ratio for the gas type, fuel length, and altitude.

Another high-tech feature is the external digital control, which enables you to precisely adjust the temperature. You can choose anything between 100 degrees and 140 degrees Fahrenheit.

Finally, there is the active bypass which manages the temperature and ensures stability.

Despite its long history, Bradford White has remained an innovative company. Over the years, it has introduced new designs, systems, and safety features. Its heaters are strong, durable, and long-lasting, making them a great option for large homes with high hot water demand.

Bradford White is renowned as a driving force in gas water heater innovation. It’s no surprise that the company’s line of gas-powered boilers is now very large.

All of their gas-powered models feature patented technology, backed up by arguably the best warranties you can find in the water heating industry.

Most of their units are made with a Vitraglas lining for extra durability. Many also feature an intelligent gas control system called ICON. It’s clear that Bradford White products boast numerous unique and useful features.

Their gas-powered water heaters are also quite energy-efficient. Most of the heaters in their range have a uniform energy factor of at least 0.54. A large percentage of their products are also Low NOx and compliant to NAECA.

Bradford White’s line of electric water heaters covers all sizes. There should be one for every household, however large its demand for hot water. Its electric models are highly efficient and NAECA compliant.

Much like their gas-powered cousins, these heaters also include Bradford White’s patented technology and exclusive features. This all results in highly productive and cost-effective water heaters.

They also have the signature Vitraglas lining and automatic controls, delivering hot water in an instant. Even Bradford White’s least advanced unit has a uniform energy factor of 0.92, a sign that it is significantly more efficient than many of its competitors.

Bradford White’s line of tankless water heaters is considerably smaller than its tank-type series but still of the same high quality. These heaters provide a good option for homeowners who require continuous hot water.

The water heaters are compact and will fit neatly into almost any space. Even so, some models are powerful enough to supply your whole house with hot water.

Being tankless doesn’t mean Bradford White avoided adding some extra technology and features. As well as supplying you with hot water indefinitely, they have a special flow switch. This switch will only activate once you open a hot water tap, helping you save electricity.

Bradford White was founded in 1881 as the Pennsylvania Range Boiler Company (1). In the decades since, they have continued to build top-quality boilers, only stopping briefly during the Second World War. During the war, they constructed pressure vessels for the Maritime Commission (2).

In 1951, Bradford White introduced its new water heater — an innovative, glass-lined tank called the Vitraglas. It wasn’t until 1959 that the company began to focus solely on producing water heaters. Around this time, it became The Pennsylvania-Bradford Appliance Corporation.

White Products of Middleville joined the Pennsylvania-Bradford Appliance Corporation in 1968. Following the merger, it became the Bradford White Corporation.

Bradford White introduced its first power-vent water heater in 1985. In 1992, it became an employee-owned company and the Bradford White we know today. It then introduced us to the HydroJet system in 1993.

Bradford White changed the water heating industry in 1996 by increasing tank warranties on residential models. The new warranty would protect storage tank heaters for six years. This isn’t the only industry-first Bradford White can claim.

Between 2009 and 2010, the ICON system was introduced, which is a gas control valve. This provided homeowners with improved protection and energy saving.

If you encounter problems with a Bradford White heater, don’t panic. You can find contact numbers as well as fax and email addresses, user manuals, and other information on the company’s support site.

There are also guides for specific models on the site. These help with any technical difficulties and can assist you in setting up your new unit.

Bradford White water heaters are, unfortunately, not sold through sites such as Amazon and Home Depot. If you want to purchase a unit, you can do so via a local distributor who sells them.

You can also acquire one through the Bradford White website. Here, you will be redirected to a local distributor once you have chosen your desired product.

Where are Bradford White Water Heaters Made?

Bradford White has been an employee-owned company since 1992 and the company has continued to base its operations in the United States, where it was founded more than a century ago. Today, it has more than 2,000 employees and its products are still manufactured in the US exclusively.

Bradford White introduced Vitraglas in 1951, the first glass-lined water heater of its type. Vitraglas was a game-changer for glass-lined boilers and the company has continued to produce heaters with glass lining ever since. They have remained a trademark of Bradford White and something that the company takes a lot of pride in.

What Other Brands Does Bradford White Own?

What Is the Life Expectancy of a Bradford White Water Heater?

The life of a Bradford White water heater can last up to 10 years if certain conditions are met. It has to be installed by a certified professional, it should be maintained and inspected by a proper technician, and it should not be moved from its initial location.

The hot water outlet must first be removed to gain access to it. Some of the most recent types manufactured by Bradford White include an anode rod housed not in the hot water outflow but rather in a port specifically designated for the anode.

How Often Should You Flush a Bradford White Water Heater?

The manufacturer recommends draining one gallon of water from the water heater every month to assist in the removal of sediment. The operations manual for your model will provide you with information regarding preventative maintenance tasks and intervals, such as draining the tank.

How Much Is a 50-Gallon Bradford White Gas Water Heater?

What Is the Warranty on a Bradford White 50-Gallon Water Heater?

The standard warranty on a Bradford White 50-gallon water heater is 6 years. You have the option of increasing the normal warranty from 6 years to 10 years. The tank, as well as the parts, are covered under this extended guarantee.

Bradford White has been producing boilers for more than a century, dating all the way back to 1881 in Pennsylvania. However, it wasn’t until 1959 that the company began focusing exclusively on water heaters. Today, their main expertise is in tank-type gas heaters.

If you’re looking for a tank-type gas heater or a hybrid heat pump, consider a unit from Bradford White, one of the oldest and most respected names in US heater production. 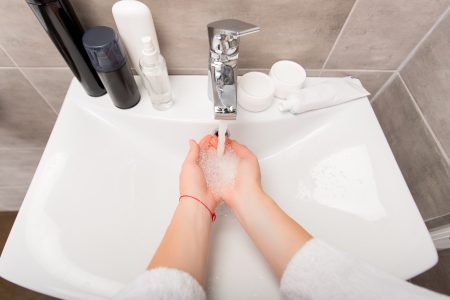 Is the Cloudy Hot Water in My Tap Dangerous?