Have you had your water softener for several years and noticed it’s not working as efficiently as it should? You might have noticed you’re using more salt and regenerating the system more often. If so, consider changing the resin and/or upgrading to a better softener.

Unfortunately, while softener resin lasts quite a long time, it’s life isn’t infinite. Eventually, it stops capturing the minerals that make your water hard, which is when it needs changing.

Here’s what you need to help you find the best water softener resin. 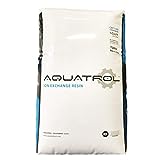 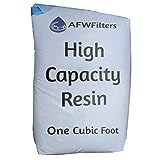 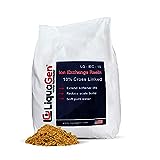 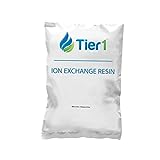 There are a few things to consider when choosing the best resin for water softeners:

Resin beads are generally made from divinylbenzene (DVB), which is wrapped in lots of strands of polystyrene, or crosslinks. This is what gives the beads strength and enables them to expand and contract without breaking.

Cations are positively charged ions that attract the hard water-causing minerals in your supply. For the exchange of ions to take place to soften water, you want strong sodium cations in your resin (2).

Your manufacturer’s instruction manual for your water softener should tell you how much resin you need. If it doesn’t, you’ll need to measure the circumference and height of your tank. Once you have these details, you can use one of the many calculators available online to ascertain your needs (3).

We have already mentioned some of the materials used to make resin for softening water; DVB and polystyrene. You might see these referred to as polystyrenic or gel resin.

The Best Water Softener Resins of 2020

To make the task of choosing a resin to replace your existing one easier, we have consulted industry expert views and customer feedback. The result is our top 5 picks of the best water softener resins, detailed below. 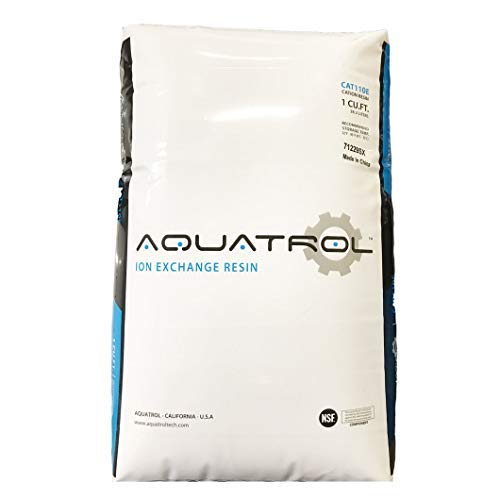 Aquatrol brings us a premium quality resin made from polystyrene and DVB beads with an eight percent crosslink.

The FDA approves the resin for use in treating food for human consumption. That means it won’t affect your drinking water after it’s been through the softening process.

We’re advised it’s suitable for any residential water softener. But it’s always best to check with your manufacturer’s specifications for your system. 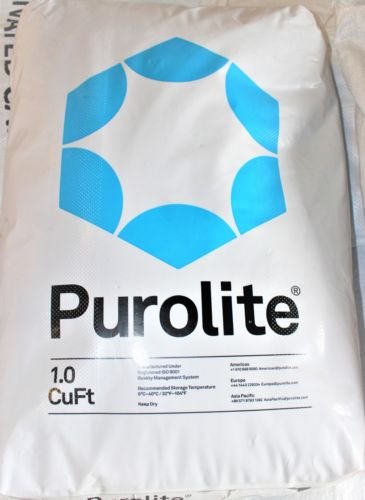 This eight percent crosslink resin is manufactured in the USA. The beads are a polystyrene gel style with DVB, making it a good choice for domestic water softener systems.

The strong acid cations are sodium-based to help remove hard water minerals and replace them with softer ones. This could mean less buildup in your plumbing and appliances.

This resin could also be suitable for commercial systems as the company advises its principal application is for industrial water softeners. 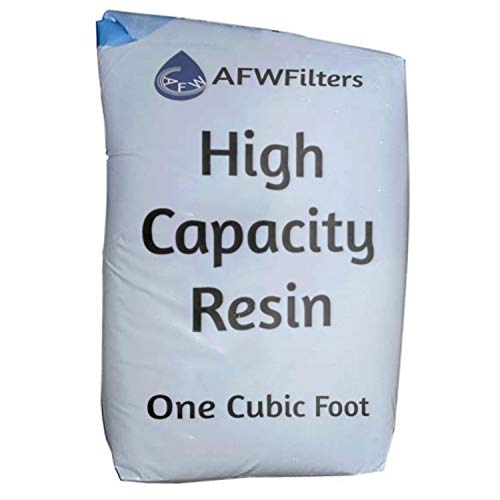 While this resin is produced in India, it has the seal of approval for use in the USA having been tested by the Water Quality Association (WQA). The WQA sets out the standards that must be adhered to for products imported for use with water softeners and other water quality materials (4).

The eight percent crosslink polystyrene and DVB beads are designed to remove calcium and magnesium from your water — it’s a strong acid sodium cation blend.

The company advises that this product, while sold as 1 cubic foot, might be delivered in smaller bags with a combined volume of 1 cubic foot.

On the downside, some people notice a strange taste in their water after replacing their existing resin with this one. Some describe it as a plastic flavor. 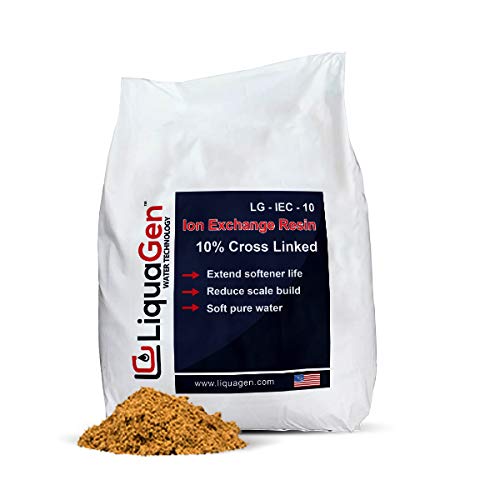 This higher crosslink could be particularly useful if your water supply contains a lot of chlorine or iron, like that from a well. These can wear down your resin beads, so the stronger the bead, the better (6).

You get 2 cubic feet of resin and a free funnel for your money. This is great when you are trying to refill your tank and find those beads don’t pour easily out of the bag. The funnel can be used to direct them to exactly where they need to be. 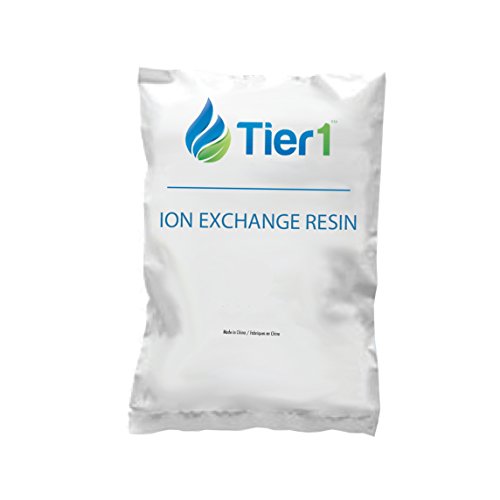 While we’re advised this is a premium grade high-quality resin, we aren’t told what the crosslink is. We can say that the gel polystyrene beads are a strong acid sodium cation, making them suitable for either home or commercial water softener systems.

This product also aims to inhibit limescale buildup in your plumbing and extend the life of appliances like dishwashers. Tier1 has such high confidence in its product that it offers an unconditional guarantee for the resin’s life.

Be careful when ordering to make sure you get enough. These are 25-liter bags, which equate to 0.88 cubic feet each.

How Does a Water Softener Work?

Water softeners work to remove hard water minerals, like calcium and magnesium, from your water, trading them for sodium, which is a softening mineral. This process is known as ionization and is the most common method of softening.

When Does My Water Softener Resin Need Replacing?

Water softener resin generally lasts about 10 years (8). This can vary depending on the quality of your municipal water supply or if your water comes from a well.

Some municipal water supplies have high chlorine content, which can reduce the lifespan of your resin. Well water can be high in iron content or have sand particles in it, which can further degenerate resin (9).

Usually, the first sign that your resin might need replacing is that your water is not soft anymore. For example, you might notice hard water stains on glassware, or your soap isn’t performing as well as you’re used to.

Despite cleaning your brine tank, changing the salt and regenerating the system, the water coming through remains hard. This could be due to your resin having reached the end of its effectiveness.

Some of the causes of ineffective resin include (10):

A sudden interruption in the high pressure of your water flow can cause the resin beads to be smashed against the side of the softener tank. This could leave beads broken or cracked.

Chlorine can cause the beads in the resin to lose strength, which can then result in them swelling to a larger size. As there is limited room in the tank for them, it could cause the beads to crack or break.

This refers to the process of the beads getting larger and smaller as they draw in minerals and then release them again. Over time, this can lead to breakage or cracking.

When the beads get damaged and cracked, the volume in the tank will eventually drop. Bits can fall off and be washed away when the tank is regenerated. The lasting effect of this is less area for ion exchange to take place, and your water won’t be as soft.

Iron in your water can react with oxygen when your tank regenerates and leave behind iron oxide. The salt used to clean the resin can’t remove this, and it builds up on the beads. Again, the availability of the area for ion exchange will be reduced, and the performance of your system will be affected (11).

Time to Replace Your Resin

You’ve checked the salt in your brine tank and cleaned that out. You’ve regenerated your system as well, but your water softener is churning out hard water. It could be you need the best water softener resin to replace the old one in your softener tank.

Following your manufacturer’s directions, this is a task you can complete yourself, saving you money on calling out a specialist.

Any of the best water softener resins we’ve detailed are suitable for domestic systems, and some are fine for commercial use. Many manufacturers recommend a change every 10 years; however, we advise to keep a close eye on your resin, and be ready to make the change when necessary. How to Remove Calcium from Water (4 Simple Methods) How to Remove Hard Water Stains from a Bathtub Join Us On Social Media

All information found on SensibleDigs.com is intended for informational and educational purposes only. The information provided on this website is not intended to be a replacement or substitute for professional advice.

Sensible Digs is a participant in the Amazon Services LLC Associates Program, an affiliate advertising program designed to provide a means for sites to earn advertising fees by advertising and linking to Amazon.com.