Shut off valves play an important role in all kinds of home plumbing systems. As you’re doing maintenance, you’re likely coming across a few.

It’s essential to know the difference between the various valves so that you know what to do in case of an emergency. Furthermore, shut off valves are not only found within your plumbing, but they’re also found along your gas line.

There are many different shut off valve types, and it’s easy to get them mixed up. But, by knowing the difference between the most common types, you can make the task a little easier on yourself.

What Is a Shut off Valve?

A shut off valve is what controls the water flow through the pipes of a building or house. There are many different types, and each serves an important purpose. It’s unlikely, though, that you’ll find every type within your home.

What type of shut off valve you’ll find in your home depends on your pipes and systems. For instance, copper valves are generally used in copper pipes, similarly plastic valves with plastic pipes. There are, of course, exceptions, but you’ll often need adapters or adhesives to install them. 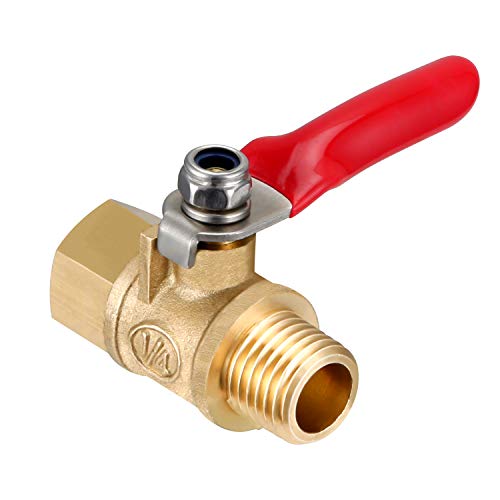 The ball valve is quite large and features a lever handle. It’s commonly used in places where a quick turn on is necessary, such as a main pipe. You can open and close it fully with a simple quarter-turn of the lever.

This type of valve is easily recognizable due to its bulbous section that holds the ball, hence the name. In addition, when the valve is open, the internal ball will align with the pipe, allowing water to gush. When closed, the ball will rotate 90 degrees and completely block the hole. 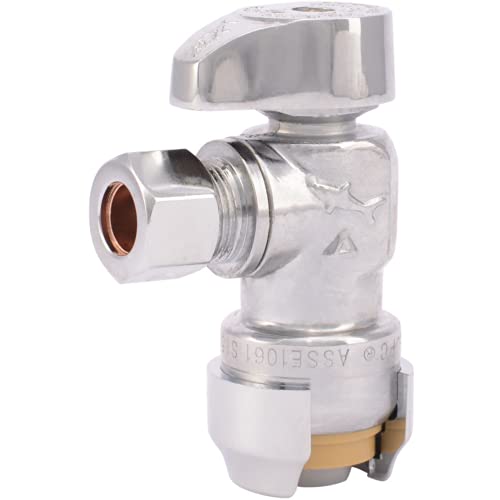 Compression stop valves are commonly found in copper water pipes. It’s a very strong valve that shuts off rather quickly when needed.

It works by pushing a brass ring in between the pipe and the valve using a compression nut. 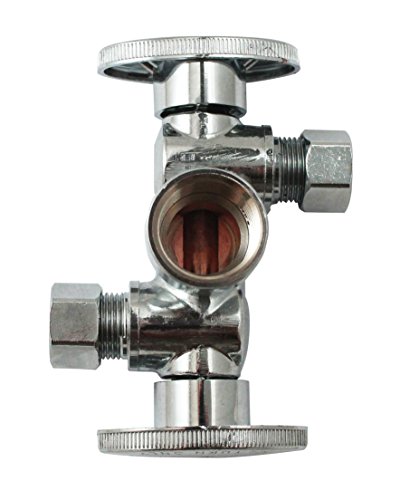 This type of valve is a bit more complex since it allows more pipes to be connected. It’s commonly used underneath kitchen sinks, but not as much in bathroom sinks or toilets.

A three-way valve works by shutting off the fluid in one pipe while allowing full pressure on the other. You can find it in your kitchen or bathroom, but it’s also commonly used in oil or steam systems. 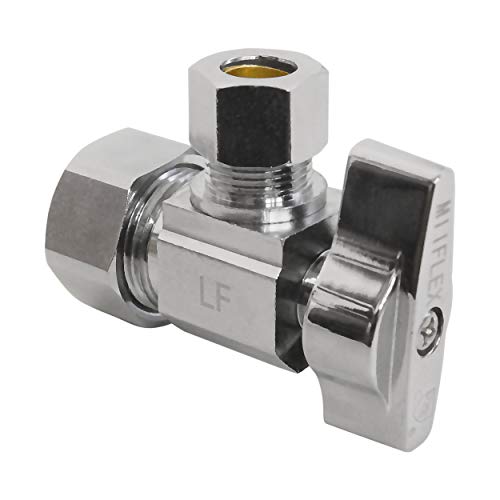 Angle stop valves are found on the pipe which exits the wall. It allows you to turn the water off to the specific toilet or faucet when replacing it — without shutting all water off to the entire house.

This type of shut off valve is very durable and can last many years without issues. In addition, angle stop valves are generally found in either brass or chrome-plated finishes. 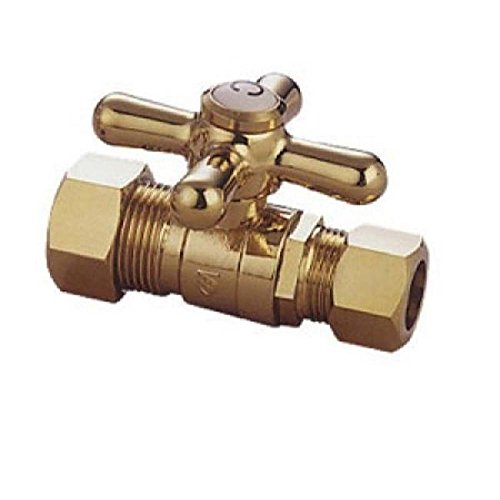 Straight stop valves are generally used in water pipes that come from the floor, unlike angle stop valves. Their purpose is to stop water from traveling back in the same direction from where it came. Similarly to angle stop valves, this type also only allows you to turn off the water supply to one specific area.

Consequently, you get to do maintenance or replacements on appliances without needing to shut the water supply for the entire house. 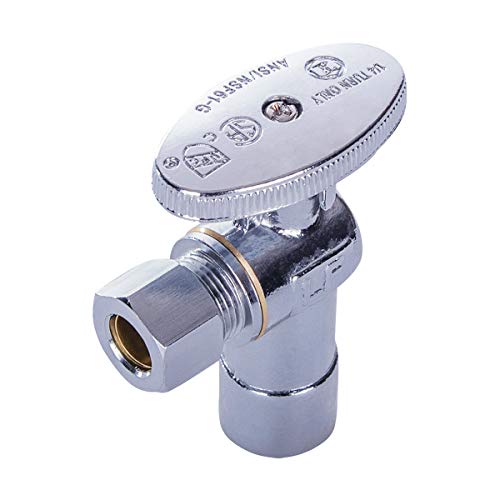 Sweat stop valves are generally used by professional plumbers in the construction phase of a house or building. This valve is usually brazed to copper water pipes, which makes it very difficult to remove. However, because they’re brazed into the pipes, they’re also very durable and will last a long time.

Sweat stop valves can be found as brass or copper. They’re a permanent solution to stop valves and are leak-free throughout their lifetime. 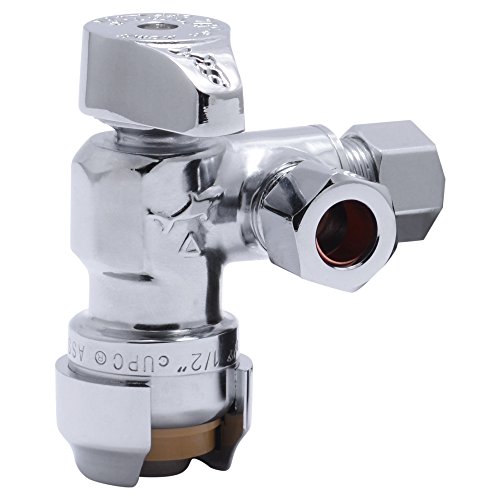 Push-fit stop valves are very simple to install and require only basic tools. Because of this, anyone with basic knowledge will be able to install them. Also called push-on stop valves, these are installed by sliding them over copper, CPVC or PEX pipes.

They consist of a rubber O-ring and stainless steel locking teeth. The locking teeth are there to keep the valve from sliding off of the pipe. The O-ring works like a gasket and ensures the intake port is watertight and sealed. 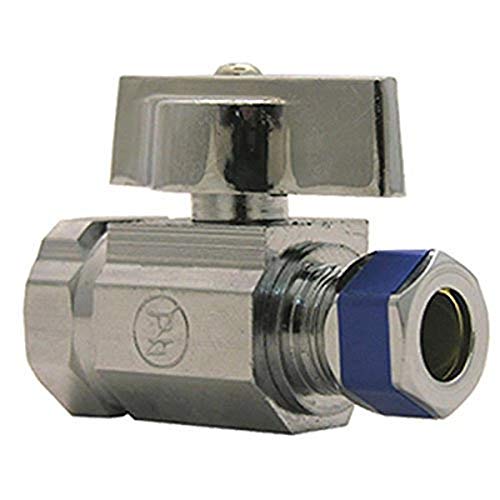 Iron pipe stop valves are used on water pipes with male threads. They’re generally easy to install on iron pipes, hence the name. All you have to do is screw it onto the pipe and it’s installed. However, if you’re using copper pipes or PVC, the installation will be trickier since you’ll need a male-adapter.

It’s a very durable shut off valve and can be used on a range of pipes as long as you have an adapter. Male adapters use the US national standard tapered thread, NPT. 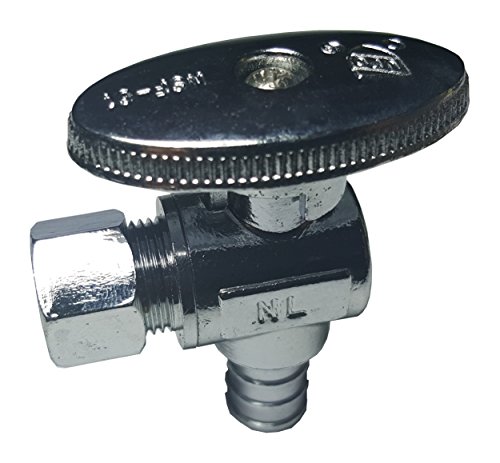 PEX is a cross-linked polyethylene material similar to plastic. This type of valve is generally less expensive than brass or copper. It’s generally used in pipes with clamp rings or crimp rings.

It works by pressing a ring compression tool against the crimp ring on the outside of the pipe. A clamp ring tool then presses a tab on one side of the ring.

The installation makes PEX valves challenging to remove, similar to copper sweat valves. Mainly because you have to cut the ring off, which usually damages the pipe. As a result, the pipe needs to be replaced. 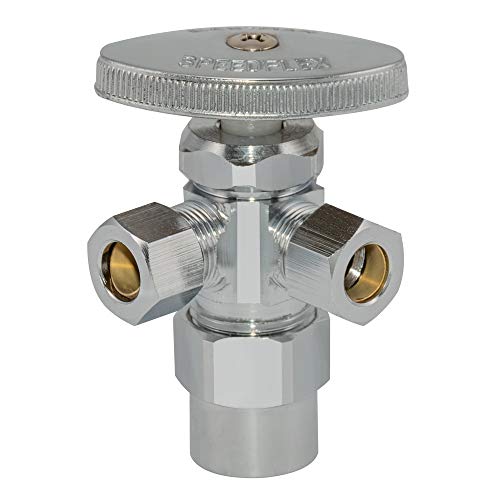 CPVC stop valves are usually used in CPVC piping systems — CPVC stands for chlorinated polyvinyl chloride. They use a specific type of cement also known as “glue” when installed.

In addition, this type of shut off valve can also be used on PVC pipes — however, PVC adhesive doesn’t bond well with CPVC material.

Because of the different adhesives, installation can be tricky to figure out, and usually requires professional help. Nonetheless, once you learn how the different “glues” work, you can easily install a CPVC valve yourself.

Where Is My Home Water Shut Off?

The main shut off valve for the home is generally found on the perimeter of the house. A good place to look is where the water first enters your home — there should be a valve here. When needed, you can turn this valve off to close all the water within your home.

However, the smaller valves can be found close to appliances or fixtures such as toilets or faucets. Here, you can use the small shut off valve to only close the water supply for this specific area. Consequently, you’ll still have water throughout your home while being able to do repairs or replacements.

Shut off valves are crucial parts of any plumbing system. They allow you to control the water flow to different appliances as well as fixtures. Some valves, such as angle stop valves, allow you to shut the water supply to specific areas, which is handy during repairs.

Installing shut off valves is a relatively easy task, depending on the type and your skills and experience. Some valves, such as CPVCs, require special “glue” when installed, which can make the task tricky. If you’re ever in doubt or unsure, call a professional to help you with repairs, installations or replacements.