Modern shower heads are designed to be as simple to install as possible, making it easier than ever to do it yourself. This can save you a lot of money that would otherwise be spent on a professional plumber.

Although installing a shower head is relatively straightforward, there still are a few decisions you will need to make to ensure it is suitable for your needs. These include which shower type you want and, importantly, the shower head height once it is installed.

How high your shower head is installed will make a significant difference to how user-friendly it is for you and your housemates. In this article, we will explain how to determine your ideal shower head height, based on your specific shower type.

How High Should a Shower Head Be?

With that said, the average height of a shower head is 80 inches, which is about 6 feet 8 inches. This will be plenty for people of average height, and it should be sufficient for all but the tallest individuals (1).

Commercial bathrooms such as in hotels and guest houses generally install shower heads a bit higher. This is because the shower needs to comfortably accommodate even the tallest guests. Most hotels install handheld shower heads for this reason.

When determining the best height for your shower head, the tallest member of the household should be measured. Using their height as a starting point, add an extra three inches or so to the measurement. These extra inches will ensure there is enough space for the tallest person to maneuver freely under the shower head.

Despite being fixed on the wall, rain shower heads can be surprisingly accommodating to various heights as they generally provide better coverage than handheld models. Even if you have a low ceiling, a rain shower head should still provide an excellent shower.

The goal of rain showers is to simulate the feeling of enjoying a natural shower in heavy rain. However, bumping your head against the shower will quickly destroy that illusion.

We recommend installing a rain shower head 84 inches above the shower floor. This should make your shower comfortable and effective for everyone in your family, whether they are tall or small.

Handheld shower heads are connected by a 3 to 6-foot hose that provides a full range of movement within the shower enclosure. These precise shower heads are an excellent option for families with children or pets. You will be able to give your children a thorough but gentle shower while avoiding their eyes.

Some handheld shower heads include a fixed wall mount. Others have adjustable docks that can be moved up or down on a sliding bar. These adjustable mounts are very useful in households with people of various sizes.

A handheld shower head can be installed at any height you wish. However, it is important to position it somewhere that is easily reachable. It shouldn’t be placed as high as a rain shower; somewhere between 72 and 78 inches is usually a good height.

How to Accommodate Everyone

If you have a large household with people of various sizes, it can be difficult to accommodate everyone. Rain shower heads are a sensible option as they provide such good coverage, but there are other possibilities if you want greater versatility.

A combination shower provides an ideal way to cater to everyone. They typically feature both a rain shower head and a handheld, adjustable head. They can accommodate an entire household as the fixed shower is perfect for adults and larger adolescents and the handheld is versatile enough for small children.

Combo showers are usually controlled by a single shower valve, but a lever or switch enables you to alternate between the two. Some combo showers allow you to use both heads simultaneously, but this could significantly reduce the water pressure.

We recommend that combo shower heads are installed at around 78 inches above the shower tray. This is slightly lower than the standard 80 inches, due to their added versatility.

As a fixed shower head usually has wider coverage, it should be installed slightly higher than a handheld. However, you shouldn’t install it as high as a rain shower as some people might be unable to reach the handheld.

Any area above the shower pan should be covered and sealed to prevent water damage such as mold and mildew. In extreme cases, fungi can form in the grout lines or any other area that is frequently exposed to moisture (2).

Again, there are no universal rules regarding the height of the shower enclosure, but they usually rise to between 72 and 78 inches above the floor. The tallest shower enclosures on the market are as tall as 96 inches.

Most builders recommend that the top of the shower enclosure is at least 3 inches higher than the shower rough-in. The rough-in is the spot where the shower arm is attached to the wall.

It might seem a good idea to install the enclosure from floor to ceiling to prevent moisture damage. However, this would also make the ventilation very poor within the shower cubicle. Leaving a gap between the enclosure and the ceiling encourages air to circulate while you’re showering and will help it dry afterward.

Once you have determined how high the shower head should be, you will also need to focus on the fixtures. Shower fixtures include the shower valve and, potentially, a bathtub faucet.

The first question to answer here is whether you have a shower stall or a shower tub. The valve needs to be placed at a reachable height for everyone in the household. On the other hand, you don’t want to bend down every time you need to turn the water on or off.

If you have a shower stall, a good place to start is the standard height of 48 inches. This should be a comfortable height for everyone in your household (3).

If your shower is installed above a bathtub, the fixtures will need to be a bit lower. This is because they usually need to be connected to the bathtub faucet. The standard height here is 28 inches.

How High Should a Shower Door Be?

It is recommended that a shower door is at least as tall as the shower head height, and ideally three inches taller. However, the height usually ranges between 72 to 78 inches — with some reaching as high as 96 inches.

How High Should the Shower Wall Be?

Unlike shower heads and doors, there are different codes for the height of shower walls, depending on the state. Most specify a minimum height of 6 feet within an enclosed shower, but it is best to make the entire enclosure watertight if possible (4).

What Do I Do If My Shower Head Is Too High?

If your shower head is too high, you can do a few things to adjust it. First, see if there is an adjustable arm that you can lower. If not, you can try attaching a shower head extension hose to the existing shower head.

This gives extra length to work with. Finally, if these options don’t work for you, you may need to call a plumber to come and take a look.

Should a Shower Head Be Centered on the Wall?

The answer to this question is both yes and no. While it is recommended that a shower head be installed at eye level, usually around five feet, or seven inches, depending on your height, this will not always be possible.

How Far Can a Shower Head Be from the Valve?

Most shower heads have a maximum height of two feet from the valve. This ensures that the water pressure is sufficient to reach the shower head.

However, some shower heads are designed to be used with higher water pressure, which can be placed up to four feet from the valve.

How Far from the Wall Should a Rain Shower Head Be?

There’s no exact rule regarding how far a showerhead should be from the wall. To calculate the optimal distance between the two, you should consider a comfortable standing position. People usually install their rainfall shower heads about 1.5 feet from the wall. 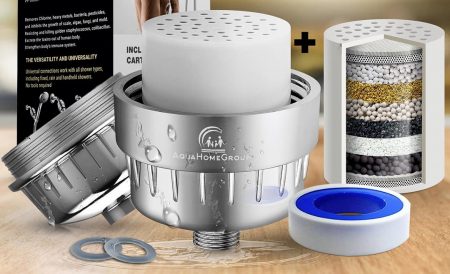 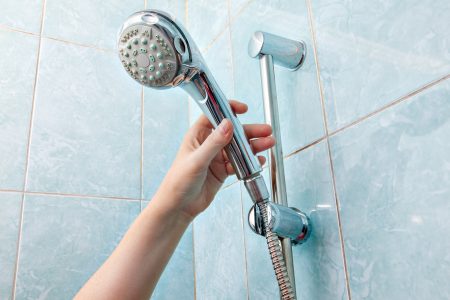