If you have ever visited a public swimming pool, you are probably familiar with the smell of chlorine. Chlorine is a highly effective cleaner and disinfectant, but did you know that it is also in your drinking water?

Chlorine may be a powerful water purifier, but it remains a controversial chemical. If you’re wondering whether or not you should ingest something that burns, smells, and dries your skin, you’re not alone.

In this article, we will explain how to remove chlorine from your water so it can be healthier while remaining pure. Before that, we will explain everything you need to know about chlorine so you can decide if removing it is the right choice for you.

Chlorine is most commonly used to keep swimming pools looking clean, but there’s more to it than meets the eye. Industrially, chlorine serves more purposes than we can count.

It is used as a pesticide and food preserver and is a component in manufacturing everything from plane seats to bulletproof vests. It also plays a role in energy, construction, computers, and healthcare (1). You might be wondering how it is possible that a cleaning agent we swim in is so versatile.

Did you know that chlorine isn’t man-made and that it is not a liquid? In fact, it is a chemical element — number 17 on the periodic table — that occurs naturally as green gas. Using the power of science, it is possible to alter its form and utilize it more effectively.

Is Chlorine Safe to Drink?

Pool owners often take chlorine use for granted, but it still has a bad reputation. It has been blamed for skin irritation and is wrongly pointed to as the reason that your eyes burn when you swim.

In reality, chlorine isn’t to blame. Scientists have discovered that chlorine alone doesn’t harm your eyes. It only burns them when it reacts to urine in your pool (2).

As disgusting as that sounds, it is the exact reason why chlorine is added to drinking water. Water is easily contaminated and chlorine has excellent disinfectant properties. It binds to and destroys bacteria and other germs far more effectively than most alternatives.

Still, chlorine is a highly toxic chemical that can be very dangerous if it is not handled properly (3).

The Dangers of Chlorine

Chlorine deserves recognition for reducing the risk of diseases spreading, but that’s largely where its benefits end. Pathogens are removed from your water, but there could be other repercussions for your health. Here are some negative potential side effects that you should keep in mind:

There is good news and bad news. On one hand, chlorine is losing favor in water purification due to its harmful effects. On the other, it is largely being replaced by its byproduct: chloramine.

Chloramine is a combination of chlorine and ammonia. It serves the same function and has similar attributes, though it is less potent. The downside is that chloramine is far more difficult to remove from water.

A standard water filter works well against chlorine but not chloramine. You will need to buy an activated carbon water filter if you want to remove chloramine (and most other pollutants) from your water supply.

How to Remove Chlorine from Water

Removing chlorine from your water is relatively easy, and the health benefits will outweigh whatever you pay for parts or labor. It’s time to find out how to get the chlorine out of your water.

Most water filtration systems use a process called reverse osmosis. Reverse osmosis will remove chlorine and other impurities from your drinking water.

Water flows through a special membrane that won’t allow contaminants to pass, meaning they get left behind.

Reverse osmosis systems are used industrially, but they are also available for home use. They are highly regarded for their effectiveness in purifying water of almost all pollutants.

Chlorine is a volatile chemical, which means it evaporates easily. If you’re looking for a way to remove chlorine from your water without spending any money, simply leave it to stand. The chlorine will gradually remove itself from the water via evaporation.

Leaving water out can remove chlorine from your water, but it isn’t without its drawbacks. You will need to exercise patience, as it isn’t an instant solution to your chlorine problem.

Your location will influence how quickly the chlorine evaporates. Chlorine is a gas at room temperature, so the warmer the air, the faster it will disperse. You can also leave your water in an open jug in your refrigerator, but it will take longer (at least 24 hours) to clear.

It may seem counterproductive to add more chemicals to your water, but chemical treatment is a legitimate way to combat chlorine. There is some chemistry involved, so this method may not be for everyone.

Potassium metabisulfite (K-meta) is the most effective treatment for chlorine. As one of these tablets is dissolved into water, it neutralizes chlorine, and then — being volatile itself — it evaporates away.

It works against chlorine and chloramine and is commonly used in breweries and wineries. It is also powerful — one potassium metabisulfite tablet can dechlorinate up to 20 gallons of water.

This is a highly effective method of water purification, though it is less popular than water filtration.

If you can get your hands on an ultraviolet light, you can use it to dechlorinate your water. It is effective against chlorine and chloramine and doesn’t have the drawbacks of chemical treatment or filtration.

Chlorine is a light-sensitive chemical, so UV rays break down and destroy traces of it. The longer chlorine is exposed to UV light, the further it dissipates.

The main problem is that UV lights aren’t exactly available from your local DIY store. They can cost a lot of money to acquire, and prolonged exposure is harmful to your skin.

If you would prefer to remove the chlorine from your water naturally, you could use the most basic method of purification: boiling it.

The science is simple: as chlorine is volatile, the warmer it is, the faster it evaporates.

It is recommended that you boil your water for at least 20 minutes to be safe. There aren’t many drawbacks to this method; it is effective and requires minimal effort.

However, you will need to monitor your water, and it uses extra energy. There are no added chemicals, and you won’t have to spend money on equipment or installation, so this is a small price to pay.

How Much Chlorine Is in Tap Water?

The CDC suggests that a quantity of chlorine in drinking water of up to four milligrams per liter, often known as four parts per million, is safe.

These concentrations are regarded as acceptable levels of chlorine in drinking water, below which it is highly unlikely that any adverse effects on health will occur.

When treated water is absorbed directly into the bloodstream, contaminants like chlorine can be dangerous to young children, immune-compromised adults, and even pets.

When considering the effects of chlorine on the immune system, it is essential to remember that chlorine frequently eradicates the helpful bacteria in your digestive tract.

The immune system will suffer if the body is deprived of beneficial microorganisms. Even though these minute levels aren’t expected to cause any harm, going above and beyond what the CDC recommends could make the situation even more dangerous.

How Can I Test My Water for Chlorine at Home?

Use a water test kit to determine how much chlorine is in the water. Utilizing a test strip is the quickest way to determine the amount of chlorine in drinking water. These strips made of plastic are comparable to those utilized in urine or drug tests.

DPD is the name of the chemical component infused into one end of the strip (diethyl-p-phenylene diamine). The strip is then dipped in water, which triggers a response in a few seconds.

If chlorine is present, the color of the test strip will change; this change in color may then be read off of a color chart to determine the degree of concentration. Although inexpensive and readily available, these test strips have an accuracy range of only around 80% to 90%.

You can also use chlorine kits. These are contained within miniature vials of liquid, just like an eye-dropper would be. You gather the water and then follow the direction to apply a certain amount of drops. Compare the results to the color chart.

Does Salt Remove Chlorine from Water?

There’s a common misconception that water softeners may purge harmful substances, such as chlorine, from the water used for drinking and bathing. On the other hand, salt-based water softeners have been unable to live up to the need for chlorine removal.

Because their technology is incapable of addressing chlorine, most salt-based softener manufacturers will recommend that customers invest in a reverse osmosis filtration system in addition to their softening.

This just reduces the amount of chlorine in the tap water at the kitchen sink; it does not affect the water used for bathing or showering. You might be surprised to learn that chlorine, which water companies use to clean your water, is considered undesirable.

Does Vinegar Remove Chlorine from Water?

Vinegar is not an efficient way to remove chlorine from water. Instead, you can boil it.

Does Bottled Water Have Chlorine?

Chlorine has a variety of uses and is an important component in many modern industries. However, adding it to drinking water has long been a source of controversy and can have a negative impact on your health. It is a highly effective disinfectant, but it is also toxic and the risks aren’t necessarily worth its benefits.

Whether or not you should look to remove the chlorine from your water will largely depend on the quality of your local water supply. It might also depend on the sensitivity of your skin, as chlorine can irritate people with delicate skin. 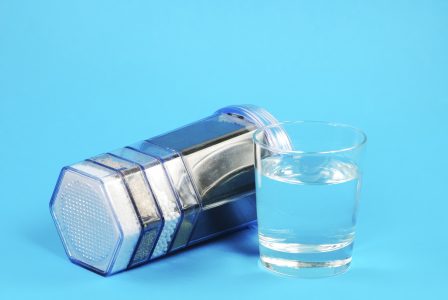 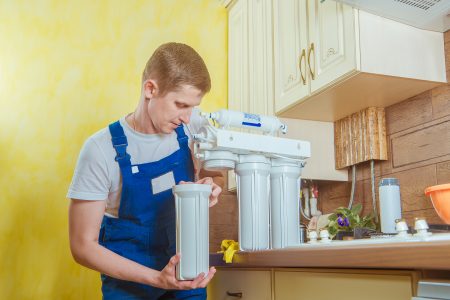 How to Install a Water Filter (4 Step Simple Guide) 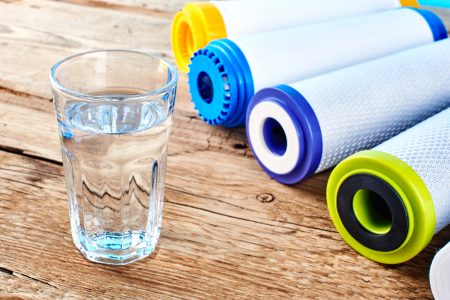 Get the Lowdown: How Does Reverse Osmosis Work? 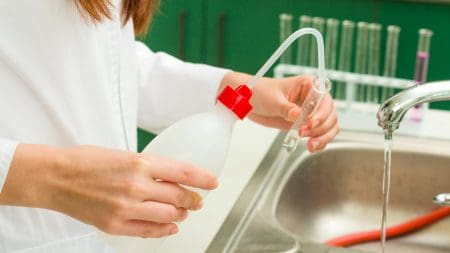 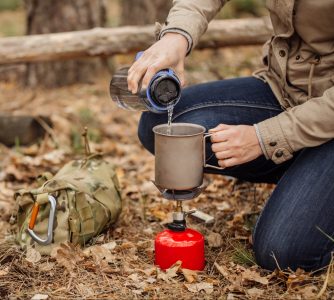