Bathing your little one can be simultaneously delightful and draining. But if you have a child that protests bath times, there could be a clever way to make washing up more enticing.

Spoiler alert: it doesn’t involve shelling out cash on expensive toys. Our little ones love to feel included, and routine hygiene is no exception. Upgrading your shower head to something more child-friendly might do the trick.

Plus, a positive association early on will always encourage good habits later on. As a parent, you don’t need to waste time with returns and refunds.

Why Buy a Kids Shower Head?

Our guide will help you buy the best kids shower head on the first try. 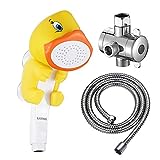 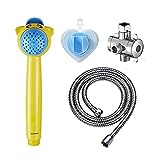 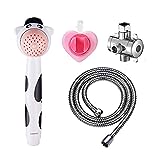 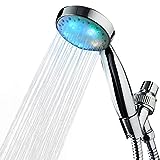 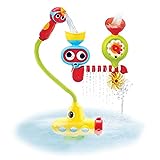 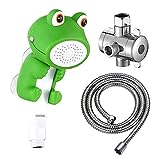 Why Buy a Kids Shower Head?

When it comes to items like shower heads, you can’t look solely at functionality. It has to be interesting and engaging, too. You can buy something that’s top of the line only to find that your little one snubs their nose at it.

Some of you may be skeptical about buying a kids’ shower head. After all, you already have a shower head that does the job — why buy another?

These shower heads are designed with younger audiences in mind. Young kids couldn’t care less about sleek chrome fixtures or modern bell-shaped models. They want something stimulating (like a colorful animal) to look at.

Engaging for Your Kid

If your child turns every bath into a battle, a cute shower head could turn things around. A unit with colored lights, such as an LED model, might be captivating enough to distract reluctant bathers from temper tantrums.

These types are often smaller, allowing your child to use them on their own. The petite build enables your little ones to practice grown-up showering without getting hurt. A full-sized model can be heavy and injure your child if they drop it.

For those of you with children who have special needs, a new shower head could make bathing less unpleasant. Children with sensory issues (e.g. autism) may find water stressful or frightening (1).

If your child is under the age of six, never leave them unsupervised: you could be risking their life. A child-appropriate shower head doesn’t eliminate the dangers of solo bathing (2).

Features for Mom and Dad

Consider the following more grown-up elements when buying a kids’ shower that will be engaging and practical.

Does the shower head come with a diverter? It’s the component that enables you to divert water flow to more than one attachment in your bath or shower (3).

Ideally, it should be compatible with your current setup. What about a hose, or will you have to buy a new one? We’d venture to guess that you’re not planning to get rid of your regular unit entirely — extras like these are important.

If you’re particular about what your child comes into contact with, you need to look at the construction. For instance, if you’re cautious about exposure to bisphenol-A (BPA) plastics, ensure the model you’re looking at doesn’t contain them. Children are particularly vulnerable to BPA, although the full spectrum of health effects is still under research (4).

Is there a mount included for your child’s shower head? You don’t want it hanging into the tub, getting in your way when you’re bathing on your own.

The design is what matters most to your little bather. It’s up to you whether you want to give your child options to pick from or surprise them. If your kid has a specific like — for example, a certain animal — that should make it easier for you.

Most of the models we’ve reviewed are animal-themed. This is for a good reason: most children’s literature, as well as cartoons and educational shows, involve animals (5).

We respect that parents are busy people, and so we’ve put in the time on your behalf to find the best kids’ shower heads on the market. Each one has undergone our rigorous selection process, combined with expert opinion to pick the best. 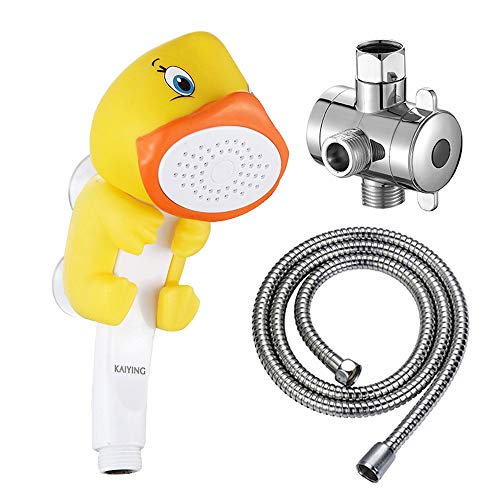 If you had a rubber duck to share bathtime with when you were a child, or had a duck-themed bathroom, this model might work for you. The Kaiying duckie shower head will appeal to both parents and children with an affinity for the classic bathing companion.

A rubber ducky is likely the first bath toy your baby will own (6). This model is the ideal complement — a larger version of your child’s favorite water-resistant plaything. The build is non-toxic, ABS plastic and is suitable for kids over one year old.

It comes with everything you’ll need to set it up, including a shower hose and diverter valve. There’s a suction mount on the duck’s back to hang up the shower head once the kids have finished washing off. The included diverter allows you to use both your shower head and your kids’ one at the same time.

Best for All Ages 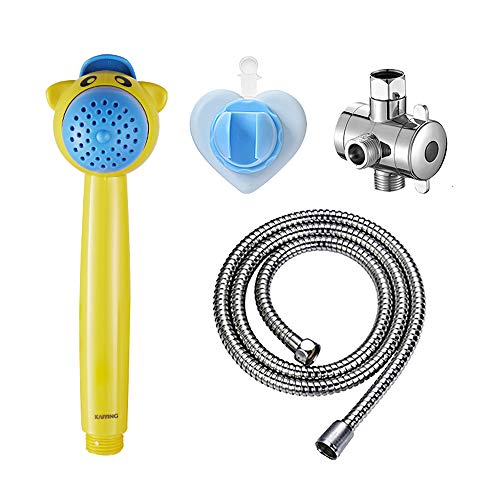 If you have more than one child, choosing a shower head with a universal appeal can be tricky. Certain designs may entice one sibling but bore another. This cow-themed kids’ shower head by Kaiying may be a solution to your problem.

The yellow character with pointy ears and a blue cap is ambiguous-looking, allowing for creative interpretation. It could be a cat for your kid who adores felines, or a cow — as intended — for your four-year-old with an obsession for farm animals.

The bright primary colors — yellow and blue — should encourage a positive response from your child (7). If your young one enjoys acting older than their years, the animal theme won’t come off as too babyish.

Setting up your Kaiying shower head won’t be too much of a hassle. The unit comes with a hose and three-way diverter for simple installation. You don’t have to go out and shop for additional parts. 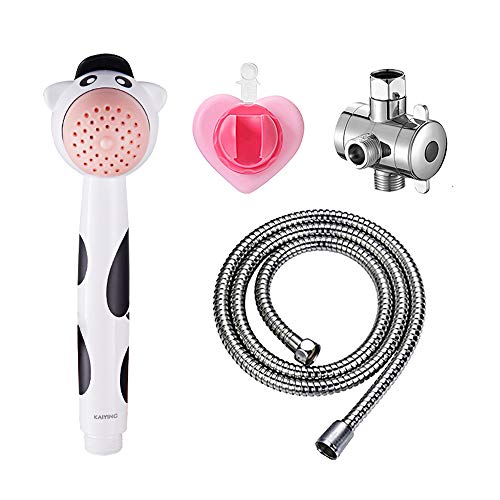 If your child goes wild for images and cartoons of cows, this cow-themed kids’ shower head could be the right fit. The character is a black and white cow. The nozzle — or nose — of the cow is pink. It’s the quintessential friendly figure your child is likely familiar with from books and shows.

There are plenty of ways to make bath time entertaining with this model. Have the cow head moo at your little one, or sing along to other nursery rhymes involving cows.

Like other Kaiying products, the plastic is food-grade ABS. This means it meets the same purity standard as any plastic that food comes into contact with. Installation should be similarly worry-free, as the set comes with a long hose — almost 60 inches long — and a diverter. 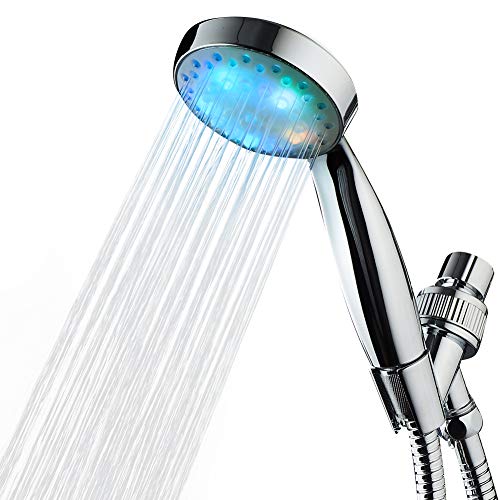 This showerhead by Kairey isn’t specifically for children, but it could work for them. It showcases three rainbow-colored lights at random intervals of a few seconds. The constant stimulation should keep your kid entertained while you wash them off. This product may be particularly attractive for parents with children who despise bathtime.

Moms and dads caring for autistic children may want to think about the Kairey. LED lighting can be both calming and intriguing to children with sensory disabilities (8). If your child enjoys colorful, sequence-type lights outside of the shower, you can always try exposing them to this LED shower head.

Although this unit doesn’t come with a built-in filter, it has self-cleaning, anti-clogging silicone jets which prevent mineral deposits.

5. My Own Shower Children’s Shower Head 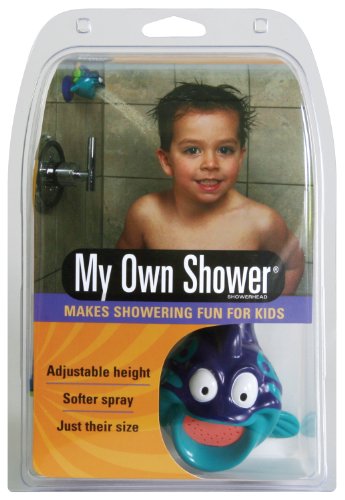 It’s simultaneously exhilarating and saddening when your child starts to demand independence. This shower head could be an ideal choice for parents who want to give older children a try at grown-up showering. By that, we mean standing up rather than sitting in the tub.

Granted, it has a vivid yellow hose and a blue cartoon fish nozzle. After all, the product is still for children — it has to be exciting to look at. Still, the relatively short hose— 3 feet — means it’s best as a standing shower. You simply suction the fish to the wall at the right height for your wannabe-adult and let them wash up.

This product will appeal to parents who want to preserve an adult aesthetic in the bathroom. The hose is detachable, so you can stash it out of sight when your kid is out of the shower.

Best for Younger and Reluctant Bathers 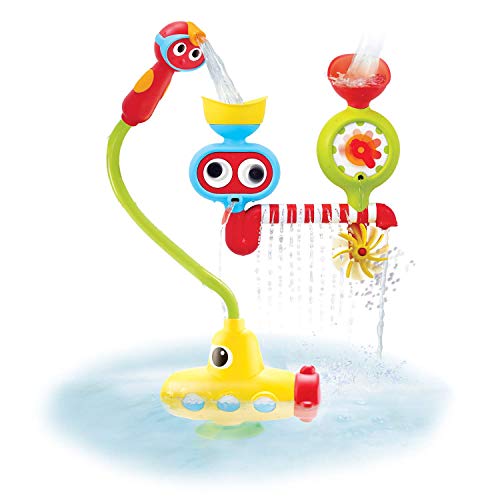 If your child is still adapting to bathing, the Yookidoo set could be the way to go. Turning bathing into an interactive game could help make it bearable for your child.

The shower head itself is a miscellaneous character attached to a jolly yellow submarine. Water circulates through the submarine by way of a battery, after which it’s then pumped out through the shower head. That alone can serve as a sufficient distraction for you to get hard chores out of the way, like hair-washing.

A set of engaging toys that you can suction-mount to your bathtub will add to the fun. Have your toddler pour water to make the fan spin, or have water come out of another funny-faced character’s mouth. The set is rated for children aged two to six, meaning it may also be perfect for households with more than one child. 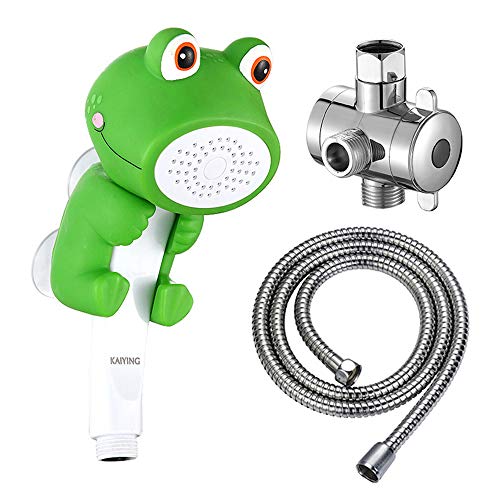 Kaiying makes our list again with this frog-character shower head. As with the cow model that we reviewed earlier, there’s a lot to work with during shower time if your kid likes frogs. Ribbit your way through ear-cleaning, face-washing, and hair-rinsing.

Let your child suction cup the shower head to the wall to stand underneath it. The compact build should allow most children over the age of one to hold it comfortably.

For parents, this Kaiying model has a couple of perks. For one, it saves you the expense of buying a hose or diverter — both are in the box.

It’s also non-toxic, and plastic parts are food-grade ABS. Finally, the diverter is multi-functional. If you’re washing up with your little one, you can run the water from more than one shower head attachment.

Bathing is something your child has to get used to doing daily. But there’s no reason why it has to be the most dreadful time of day.

Always keep your child’s preferences at the forefront of your mind. A cow versus a duck may be meaningless to you but could be the difference between tears and giggles for your kid.

Plus, if your child is having a good time, you probably will too. Meltdowns in the bath can get messy and destructive, fast. We know that laughter and splashes are infinitely preferable to tsunami-causing temper tantrums. Ditch the Drips: How to Fix a Leaky Shower Faucet