Are you suffering from too little or too much water in your toilet? Both are a sign that your toilet float needs adjustment. If the float isn’t set correctly, it could lead to excess water leakage and clogging when you flush.

We show you how to adjust the toilet float and discuss the tell-tale signs that you have a problem.

When To Adjust The Toilet Float

Modern toilets are economical and use just enough water for the flush. However, because the margins are so tight, it can be an issue if too much or too little water is in the system. If that happens, you will need to lift the lid on the toilet tank and examine the toilet float.

Learning how to adjust the toilet float is crucial as a homeowner if you want to save yourself a packet on plumber costs. It’s also important to know the tell-tale signs of a malfunction.

When you notice the toilet only manages half a flush, there could be several reasons why. The chain may need adjusting because it is too tight, or you could have a perished or clogged flapper valve.

Unless you have a supernatural presence, when the toilet flushes on its own, it is a sign that water is escaping from the toilet tank, and as it empties, it triggers the toilet fill valve. You might have a damaged flapper valve or an elongated refill tube.

This is easily remedied by adjusting the float valve, and it could save you thousands of lost gallons of water.

How to Repair a Running Toilet (3 Easy Ways)

Your toilet system delivers the exact amount of water needed to provide flushing power for solid waste. If the float isn’t set correctly, neither is the water level, meaning there is an insufficient force to flush fecal matter down the drain.

The toilet becomes inefficient, which causes it to backup.

How To Unclog a Toilet When Nothing Works

This design is long-established and one of the most widely used older toilet float types. It consists of a ball float attached to an arm that triggers the refill valve when the water drops to a specified level, refilling the toilet tank. It is simple, easy to understand, and above all, reliable.

You can easily adjust the water levels in your toilet tank, and getting hold of spares and new parts is pretty simple too. This type of flush is still widely used in many homes because it is reliable and rarely malfunctions.

You might want to check your local plumbing codes because ball valves are generally outdated and don’t conform to modern plumbing standards.

These toilet float valves were developed in the 1950s, but compared to ball floats, they are the new kids on the block and are fast becoming the industry standard. They are user-friendly, easy to install because they come as one complete unit, and easy to adjust.

So, how do they work?

Inside the valve shaft is a toilet float cup that raises and lowers as the water levels fluctuate. There is no ball float, and instead it relies on a metal rod attached to a float that controls the fill valve with a metal spring clip.

How To Adjust a Ball and Arm Float

Before diving into the details, there are some tools you will need to get the job done.

Some toilet tanks have the correct fill line imprinted on the inside of the tank. Lift the lid and place it on a dry towel for protection.

The top can be heavy, so either get assistance or use a pair of rubber gloves for additional grip.

Grab the torch and examine the inside of the tank. If you spot the fill line and the water is below or above, you know the ball valve needs to be adjusted. The ideal level should be 1 to 2 inches below the overflow and fill tube.

2. Shut Off The Water

Using the torch, locate the small tap valve behind the toilet at the base of the tank. Turn it until the water stops flowing. Now, flush the tank and allow the water to drain away.

One of the tell-tale signs that your ball valve has failed is to check if it contains water. Water inside the float adds extra weight and causes it to trigger when the water is at the incorrect fill level. If you have a split in the plastic, you will need to replace the entire ball and arm.

4. Adjust The Height of The Ball

Some floats can be adjusted using a screwdriver to raise or lower the levels, while others have a small plastic nut that winds up or down to lift the ball float. If the nut proves too stubborn to move, grab the pliers and give it a gentle twist.

Once you have aligned the ball float with the fill line indicator etched into the wall of the toilet tank, it’s time to switch the water back on. Allow a couple of minutes for the tank to refill and check that the water reaches the desired levels.

Flush the toilet and wait to see how high the water rises against the indicator line. You may need a couple of attempts to get it right.

How To Adjust a Fluidmaster Float

Now it’s time to look at adjusting the cylinder float valve, but before we do, let’s look at the tools you will need.

Just as you did when adjusting the ball float valve, first, you need to check the water levels against the indicator line inside the toilet tank. Lift the lid and place it on a dry towel. Use rubber gloves for extra grip.

2. Shut Off The Water

Locate the water tap at the base of the tank and twist it until the water stops flowing. Now flush the tank once or twice to drain the water.

You will see a thin tube attached to the flush valve, either running parallel or horizontally from the top. A Phillips screwdriver is the correct tool to use for this adjustment.

Only adjust the valve by one full rotation at most.

5. Turn The Water Back On

Switch the water on and allow the tank to fill. Flush it once and watch as the tank refills. If it reaches the correct levels, you have succeeded, but it might take several attempts to get it right.

Where Should the Float be In a Toilet?

The float is located inside the toilet tank and regulates the amount of water after flushing. It should be set at the required fill level, as indicated by the fill line inside the tank or when the water is about 2 inches below the overflow valve.

Why is My Toilet Float Not Working?

If that happens, the added weight of the water affects the way the float works, which also changes the water levels inside the tank.

There could also be another reason why the float is not working. If the flush chain is too tight, it could cause the flapper valve to remain open, which continuously drains the water tank and causes it to ghost flush.

You may have a corroded or split flapper valve, so it fails to seal after flushing.

How Do You Fix a Sticky Toilet Float?

The two most common reasons your toilet float is sticking are mineral deposits on the float causing it to catch and a poorly installed float that needs adjusting. Remove the chalky substance to allow the float to move freely.

The secret to fixing your toilet float is to act as soon as the problem develops. Waiting for it to get worse leads to bigger issues further down the line. It’s worth investing 20 minutes of your time to potentially save a lot of plumber costs when the toilet develops more severe problems.

And the good news is even those with limited DIY skills can attempt this quick fix. So, what are you waiting for? Give it a go. 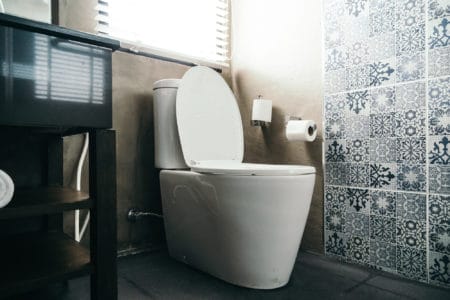 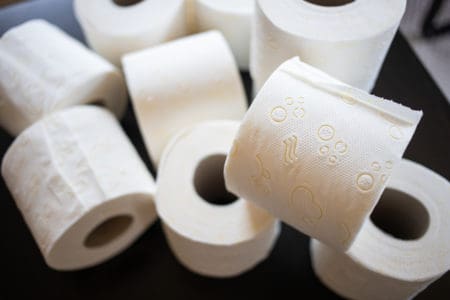 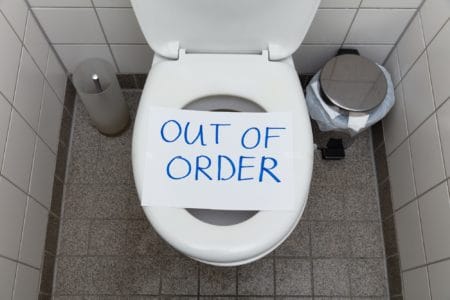 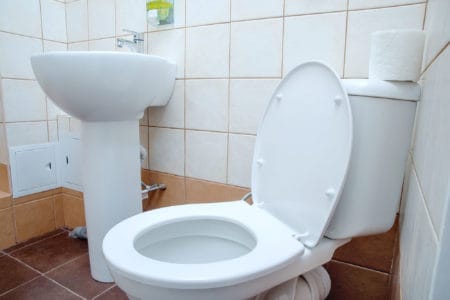 Blue Toilet Seat (Why it Happens and How to Fix It) 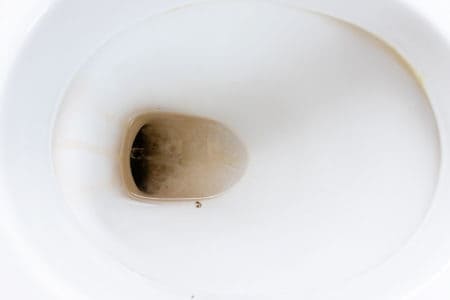 Brown Water In My Toilet (and What to Do About it)